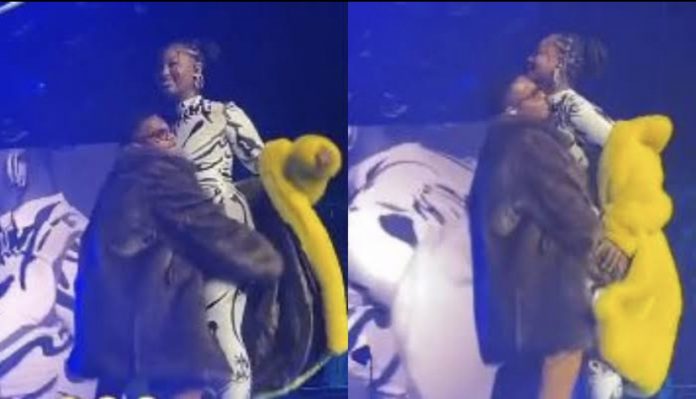 Mixed reactions has trailed Wizkid’s attempt to lift Tems while they performed on stage.

A video recently surfaced on the internet which shows the moment the 31-year-old “Fever” singer trying to lift Tems during their stage performance.

The clip captured during Big Wiz’s “Made In Lagos” just concluded London O2 Arena while the duo performed his Grammy award-nominated track, “Essence.”

Wizkid stretched out his hands towards Tems backside in an attempt to lift her up, but she speedily took his hands off her body.

The incident has accumulated several reactions from social media users.

The performance, which took place at O2 Arena caused a lot of controversies as some fans on Twitter accused Wizkid of sexual harassment while some tried to defend him.

sweetsophieeee said: “I like what she did there before una start to give her names.”

mizkimoraprecious said: “After she don sing “only you fit hold my body” them hold you now, Tems turn to mummy G.O once. This one na real TEMS AND CONDITION…… WhatsApp stickers don sure like this.”

@splitflows, said, “Lifting her in such a manner is even an inappropriate behavior unless it was rehearsed or given impromptu consent. She’s not a can of malt.”

@queenosky said, “On close inspection, it does look like Tems was not happy with Wizkid trying to lift her up. Oh dear.”

BBNaija star, Laycon, blast troll who said “he is not worthy...