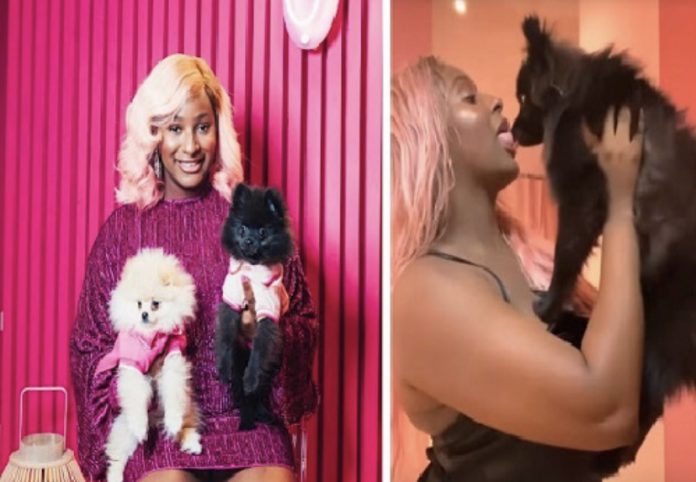 Social media users have banged Florence Otedola,  known as DJ Cuppy for smooching one of her puppies.

Few months ago, she had obtained two puppies and shared a video in which she introduced them as her ‘babies’, Dúdú and FünFün Otedola; 3 months old Pomeranian brothers.

Cuppy also went a step further to open an Instagram account for her Pomeranian sons and did a photoshoot with them.

In a recent video shared on her Instagram page, the assumed ‘mother’ who was about going out with her ‘kids’ felt compelled to compensate them for being a bad mother.

The “Gelato’ crooner agreed to do the ‘lizard kiss’ with Dúdú (that is, using her tongue to touch her puppy’s).

In the video, she said: “Not me trying to compensate for being a bad mother and going out without my baby….uh! I love you!”

Her supposed motherly concern of love to her puppy enticed a lot of objections from social media users as they have continued to knock her for her action.

prudyice_ said: “This is what we are talking about puppies and humans , if you know you know.”

kurulus_____ wrote: “I used to get mad at people for always trying to bully this lady….but now kini gbogbo radarada yi ? (what is all these nonsense)?”

mytravelhotellifestyle wrote: “And one brotha would be dying to kiss this girl, life haha.”

wilyfred10 wrote: “Nah so e Dey start …. am sure it has started already.”

greeneiwobi asked: “What is this nonsense. Hope the dog won’t be washing plate too.”

sidneys_gram asked: “U sure say na only tongue this dogs Dey lick?”

princeroyelx stated: “This Video goes a Long way to Explain what I have been hearing that Girls using Dogs to do.”

Bobrisky discloses he will never stop being a crossdresser

Lagos: Film maker Rotimi Salami explains how he was robbed at...