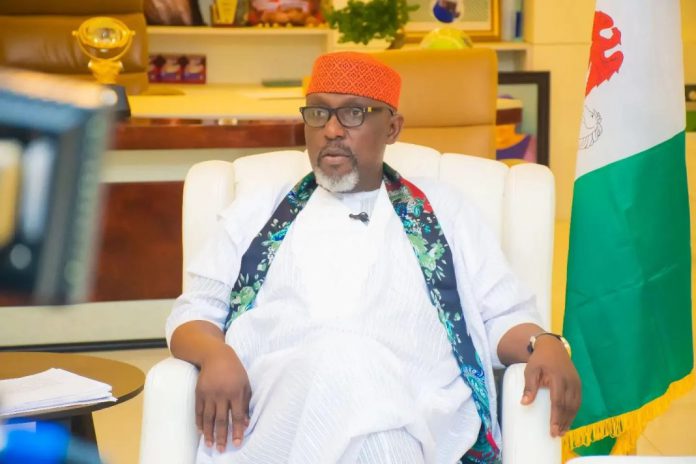 The Economic and Financial Crimes Commission (EFCC) has arrested the former Governor of Imo State and presidential aspirant on the platform of the All Progressives Congress (APC), Senator Rochas Okorocha.

It was gathered that Okorocha was arrested on Tuesday evening around 6:30 p.m. at his residence in the Maitama area of Abuja, after a siege that lasted six hours.

He was arrested minutes after security operatives fired teargas to disperse protesters who had gathered at his residence.

According to reports, he was taken away in a white Hilux vehicle by armed security operatives.

The anti-graft agency had earlier invaded the residence of the former Imo State governor in an attempt to arrest him.

Dozens of protesters had stormed his residence to protest the presence of the operatives and armed security personnel at the former governor’s house.

The siege started at about 11:30 a.m. when dozens of security operatives arrived at the residence.

Okorocha had addressed some journalists in his house and alleged that the EFCC was trying to frustrate his presidential ambition. He specifically accused the anti-graft agency of preventing him from attending the screening of APC presidential aspirants in Abuja.

Okorocha was accused of diverting public properties worth N2.9 billion when he was governor of Imo State.

The EFCC had filed a 17-count charge against him before an Abuja Federal High Court, on January 24, 2022.

“EFCC had on January 24, 2022, filed a 17-count criminal charge bordering on diversion of public funds and properties to the tune of N2.9billion against Okorocha,” Mr Uwujaren wrote in the statement.

“The case was assigned to Honourable Justice Inyang Ekwo of the Federal High Court, Abuja, but attempts to arraign Senator Okorocha were twice stalled owing to the absence of the ex-governor who evaded service of processes.”

“At the last adjourned date, March 28th, 2022, Justice Ekwo before adjourning until May 30th, 2022, had warned that it was “the last adjournment I shall grant in this matter”, said Uwujaren

“In the circumstances, the Commission is left with no other option than to effect the arrest of Senator Okorocha and bring him to trial.”

COVID-19 will subside but it not go away, RCCG General Overseer...