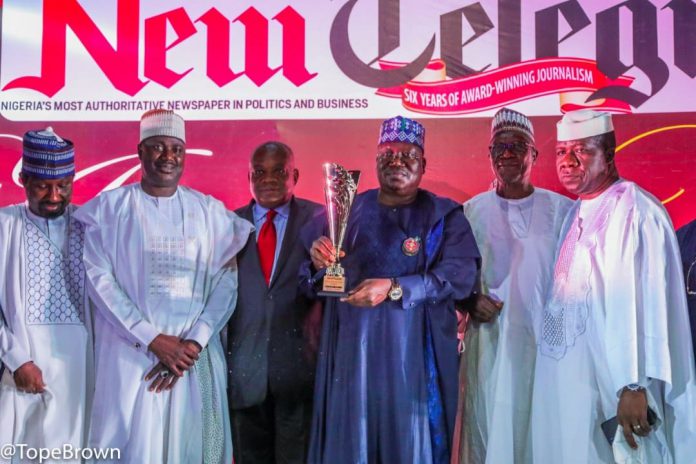 The President of the Senate, Ahmad Lawan has applauded the prevailing atmosphere of unity among his Distinguished Senator colleagues saying that it has made the ninth Senate different from the previous ones.

Lawan said the unity among the Senators of different political persuasions and their focus and determination to work for Nigeria had made the ninth National Assembly record some successes.

The Senate President spoke on Friday in Lagos at the 2021 award night of the New Telegraph Newspapers where he was honoured with the Lifetime Achievement in Politics Award.

Also honoured were some State Governors, Ministers, and Lawmakers including Senator Mohammed Sani Musa who received the Most Innovative Senator of the Year 2021 Award.

Speaking on behalf of the awardees, the Senate President said: “This ninth Assembly, I’m sure is the major reason why an award was given to me. But I want to take us back to what the chairman of the Board of New Telegraph said in his remarks at the beginning.

“He said accomplishments are lifetime. Today I’m 22 years plus as a member of the National Assembly and therefore if I’m Senate President today by the Grace of God and we are able to achieve some feat in the Ninth Senate, I have to show my gratitude to my colleagues in the House of Representatives where I served for two terms of eight years, 1999 to 2007, and to my colleagues in the Senate where I started my journey in 2007 to date.

“When we came in in 2019 and our colleagues decided to give us the opportunity to serve them, we all decided that this time around, we must work for Nigeria.

“We must work together regardless of our political disposition and so far, Ninth Senate and indeed the ninth National Assembly has recorded a great deal of successes but that is not to say that we don’t have our failures. We have.

“That, I’m sure, gives the executive arm of government the opportunity to start the implementation of the budget in the first month of the new year, that is January.

“I want to also add here and I want to thank the chairman of the Board of the New Telegraph that it is this Senate and indeed this National Assembly that broke the jinx of passing the Petroleum Industry Bill that defied passage.

“All previous efforts and I was a player in all those efforts from 2008 when the first PIB was presented to the National Assembly by the Umaru Musa Yar’Adua administration.

“All the efforts failed but in this Senate, we have been able to pass it and Mr. President was able to assent to it and this is one very important, historic, and in fact a central pillar of legislation for our country.

“I believe that, as politicians at all levels of governance, we should work together, we should complement each other. We should partner and ensure that we deliver services to the people of our country.

“Nigeria faces security challenges but I think there is certainly determination at all levels of government to fight the insecurity that we face.

“In some areas, we have succeeded but in others, we are still working hard to succeed. What is important is for us to continue to remain focused, remain undivided, remain united as a people.

“Crime by anyone is a crime. If someone in an ethnic group commits a crime, he’s a criminal regardless of what he is. It doesn’t matter, the country is supposed to fight against that person.

“Criminals should not enjoy support from any group even if it is from their ethnic group. Once again, I want to take this opportunity to thank the New Telegraph management and leadership for giving us these honours and awards and I want to assure the New Telegraph management and leadership and indeed Nigerians that these awards will spur us to do more.”

Kidnap of Schoolboys in Buhari’s Home State is a Slap on...