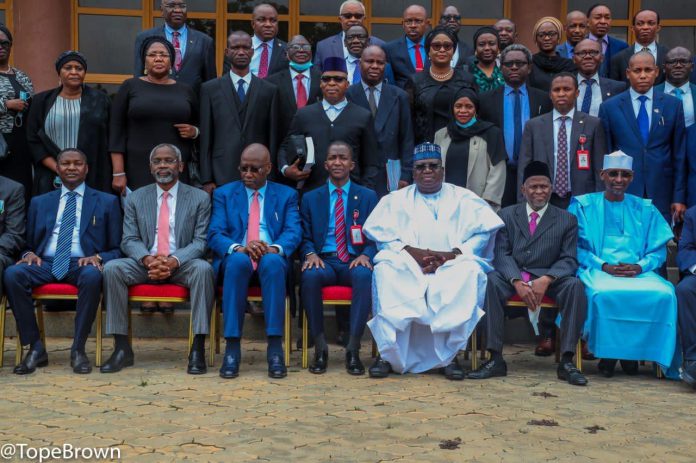 The President of the Senate, Ahmad Lawan has assured the judiciary that the National Assembly is determined to provide any possible support to enable it to discharge its mandate.

“We are determined in the National Assembly, even though we have only one year to go, to give you any possible support to ensure that you have the wherewithal to discharge your mandate,” Lawan told a gathering of judges and justices in Abuja on Monday.

He spoke at a capacity building workshop for Judges and Justices which was organised by the Economic and Financial Crimes Commission(EFCC) in collaboration with the National Judicial Institute.

“What we need is a collaboration that will make the Judicial arm of government stand on its feet. The resources so far given to this arm of government cannot be said to be sufficient but I believe that we can do better.

“I want a situation wherein 2023, even before then if the opportunity arises, that we make resources available to the judicial arm of government especially those courts that need the kind of support for them to prosecute those offenders who have taken our money.”

Lawan said the National Assembly, had been at the forefront in the fight against corruption in the country.

“This is because the laws have to be made before they are implemented or actualised by our anti-corruption agencies.

“So we are fully and completely involved in the fight against corruption in our country.

“We are determined in the National Assembly, even though we have only one year to go, let me assure the Judicial arm of government, that we are determined to give you any possible support to ensure that you have the wherewithal to discharge your mandate.

“I’m taking the opportunity here to charge the Attorney General of the Federation that, let make 2023 appropriation, a year for the judiciary in Nigeria to always remember.

“I want to make this promise here that we are going to make your budget better than 2022 and probably better than at any other time in 2023.

“Without resources, no matter how hard we try, we cannot be at the best that we want to be. So it’s about getting more resources and using them judiciously and I’m sure that that is not the problem. The problem is, let’s have the resources and I’m giving you that promise.

“Taking those involved in financial crimes to the courts and prosecuting them and maybe jailing them is supposed to be the last resort.

“We need to do more in the areas of fighting against the causes of corruption. I will commend the EFCC especially the chairman for having a record of prosecution of over 2000 last year and already as you will even have a better outcome or result for 2022.

“But I believe there are causes of corruption in Nigeria and those of us in the Legislature and the executive arm of government are supposed to do a lot more to ensure that people don’t find it easy to be corrupt.

“We must improve on the lives of the ordinary people. I’m not justifying corruption because somebody doesn’t have but it is the orientation and this is our job as parliamentarians and as the executive arm of government, national orientation and others.

“But whoever crosses the line should face the law and of course, so far so good in the fight against corruption by the EFCC and other agencies of the Federal government.

“We will look at all those areas that perhaps make it easy for people to be corrupt, for them to put their hands into where their hands shouldn’t be.

“And it is not only about Public Service but even the private sector. There are a lot of corrupt tendencies and practices in both the private and public sectors.

“We will continue to look at the legislation that will make it difficult if not impossible for people to enrich themselves, especially with our common patrimony,” Lawan said.