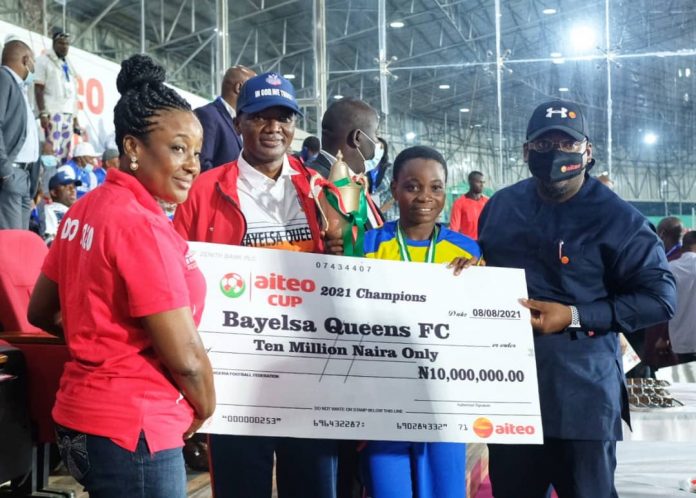 Bayelsa United pocketed the sum of N25million following their triumph in the 2021 Aiteo Cup final with Nasarawa United earning N10million as runners-up.

Bayelsa Queens, the 2021 Women’s Aiteo Cup Champions got N10million to the good, and second best, FC Robo Queens returned to Lagos with N5million.

For the first time in the history of Nigeria’s Cup competitions, one State claimed both the women and men titles as second-tier Bayelsa United and Bayelsa Queens were crowned winners of the 2021 AITEO Cup
competition in Benin City on Sunday.

Epic battles were fought by both teams in each of the finals under driving rain in the Edo State capital, and an avalanche of 10 goals made the evening well worth it for football action-starved fans at the Samuel Ogbemudia Stadium.

It was a delightful experience for dignitaries and spectators as the AITEO Cup returned with fanfare and pomp after the global coronavirus pandemic forced cancellation of the competition last year.

Bayelsa Queens’ livewire Mary Anjor set the ball rolling for a fruitful day for the ‘Glory of all Lands’ when she poked in her eighth goal of the competition in the 15th minute of the women’s final to put her team ahead. FC Robo’s captain Gift Monday replied sharply four minutes later, but Juliet Sunday (37th minute) and Peace Efih (43rd minute) made sure the girls from Yenagoa held a comfortable lead going into the break.

On resumption, both teams continued to delight the crowd that included Governor Godwin Obaseki and the Deputy Governors of Edo, Bayelsa, and Nasarawa States. There were also President of NFF and FIFA Council Member, Mr Amaju Melvin Pinnick and AITEO’s Head of Corporate Communications Ndiana Matthew.

Habibat Akinwande pulled one back for the girls from Lagos in the 65th minute, but substitute Joy Bokiri made the game safe with a spectacular fourth goal from a free kick 22 yards out.

In the men’s final, NPFL side Nasarawa United had no reason to under-rate Bayelsa United, aware that the boys coached by former international Dipreye Teibowei had claimed the scalps of NPFL juggernauts Rangers International, Lobi Stars and Rivers United on their way to the final.

Yet, they were slack to things as Inikurogha Okardi smashed in from the right in the 19th minute. The loud ovation that greeted the goal was still on when Chinedu Ohanachom sent a pile driver past goalkeeper John Shaibu for the leveler.

Aliyu Abdullahi shot the Solid Miners in front in the 26th minute, but 10 minutes later, Emo James rose highest in the box to nod home a sweet equalizer for the Bayelsa boys.

The second period was a tight and tense affair that however produced no goal. In the ensuing penalty shootout, the boys from Bayelsa prevailed 4-3 to claim their first-ever national silverware.