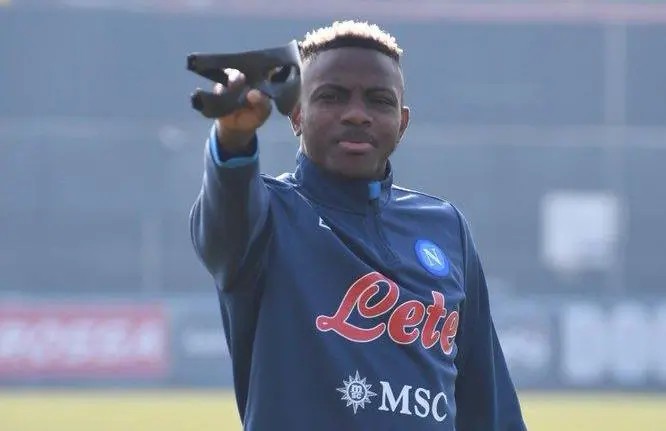 Tottenham Hotspur is reportedly looking to beat rivals Arsenal and Manchester United to the signing of Nigerian striker, Victor Osimhen this summer.

Arsenal and Manchester United have been continually linked with Osimhen since January. But Napoli’s valuation of the striker has been the major debacle for a deal to take place.

The Partenopeans are demanding a fee of around €100million-€110million for Osimhen, who they bought from Lille for €70million in 2020.

However, Osimhen could still find himself in North London, albeit with the Lillywhites. According to London Sun, Tottenham could capitalise on Arsenal and Manchester United’s hesitancy to sign Osimhen.

The North Londoners already have an upper hand, as they will play in the Champions League next season.
But Pundits are of the view that it would be tough for Tottenham to cough out €100million, except if a big player leaves the club.

The Italian tactician is said to be looking to shake the Premier League next season. And with Osimhen in his Arsenal, Tottenham could fancy their chances at a long-awaited trophy.

Eagles manager, Peseiro says there is nothing to worry over loss to Algeria.

Load shedding to remain at stage 4 until further notice –...