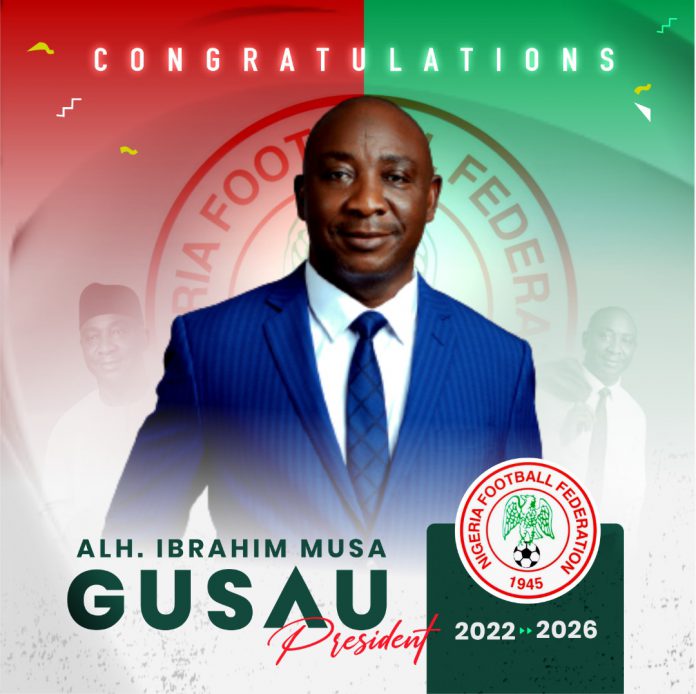 Alhaji Ibrahim Musa Gusau was on Friday elected the new President of Nigeria Football Federation, succeeding Mr. Amaju Melvin Pinnick who was in the role for the past eight years.

Akinwunmi, who is Chairman of the Lagos State Football Association, announced his withdrawal just before the run-off was to take place, just as Mallam Shehu Dikko (who polled 6 votes) and Alhaji Abba Abdullahi Yola (1 vote). However, former international goalkeeper Peterside Idah (1 vote in round one) refused to step down and earned another 1 vote in run-off, as Gusau coasted home with 39 votes.

The 58 –year old Gusau is a qualified accountant and a Safety and Security Officer for the Confederation of African Football.

The race for the presidency, which had 11 contestants, was whittled down before the ballot as Mazi Amanze Uchegbulam withdrew few days to the poll, while Barr. Musa Amadu, Hon. Suleiman Yahaya-Kwande and Mr. Adam Mukhtar Mohammed pulled out just before the vote inside the auditorium.

Alhaji Yusuf Ahmed Fresh was unopposed for the position of Chairman of Chairmen, just as Alhaji Sharif Rabiu Inuwa had an easy ride picking a slot from the North West without any opposition.

The race for seats from the South-East zone was suspended on a technicality, but Otunba Sunday Dele-Ajayi made a return to the NFF Board from the South West just as Alhaji Ganiyu Majekodunmi retained his seat. Dele-Ajayi and Majekodunmi earned 12 votes each in the run-off, with Gafar Liameed third with 7 votes and Afolabi Taiwo Olugbenga in fourth place with 4 votes.

The momentous event that lasted well into the night was witnessed by three officials of world football-governing body, FIFA: Gelson Fernandes, Solomon Mudege and Ahmad Mohamed Mukhtar Harraz.Mr. Felix Majani was the eye of the Confederation of African Football.

Hot and humid weather expected in parts of Western Cape