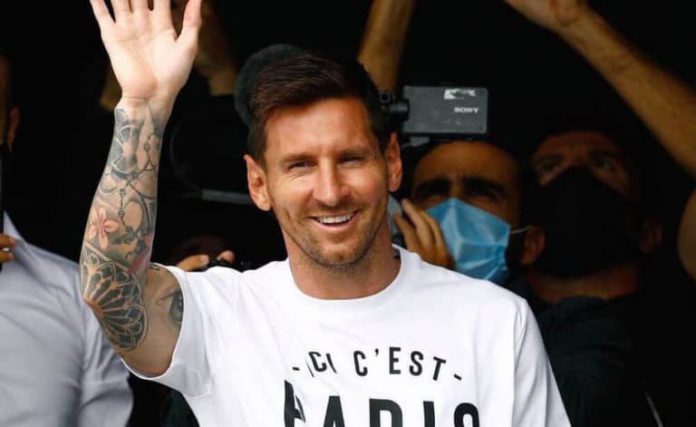 Lionel Messi will leave PSG in 2023 to join MLS side, Inter Miami where he will also secure a 35 percent ownership stake, claims a source.

The Argentine icon, 34, saw his Barcelona career come to a teary end last year. The club’s financial woes meant a new Messi contract could not be ratified by LaLiga. His 22-year association with the Spanish giants then came to an end with PSG securing his services.

A two-year deal with a reported option for a third was agreed. Playing alongside the likes of Neymar and Kylian Mbappe in a comparatively weaker league, Messi was expected to tear Ligue 1 up.

However, his time in Paris thus far has been an altogether disappointing one. In 25 Ligue 1 outings, Messi’s return stands at a paltry six goals and 13 assists.
While those figures might not sound disastrous, they are a far cry from those we are accustomed to seeing Messi churn out.

The Argentine was recently overlooked for the official Ligue 1 team of the year. That would’ve been unthinkable when his arrival at PSG was announced to great fanfare in 2021.

Now, according to Spanish outlet Marca, Messi’s time at PSG will conclude in 2023. Their information stems from the reporting of DirecTV journalist Alex Candal. He stated Messi will reportedly move to America to join David Beckham’s Inter Miami in 2023 and will purchase 35 percent of the club’s ownership shares in the process.

A Messi move to Miami has been spoken about in the past, including by Inter’s co-owner and executive director, Jorge Mas.

Speaking to the Miami Herald in February, Mas said (via Marca): “Lionel Messi is still one of the best players in the world, his skills have not diminished.

“I believe, and David [Beckham] has a relationship with him, that if he leaves PSG, at the time he leaves PSG we would love to have Messi as a player at Inter Miami and be part of our community

Arsenal Flies Out For Pre -Season

Are the robots taking over business? [Article]