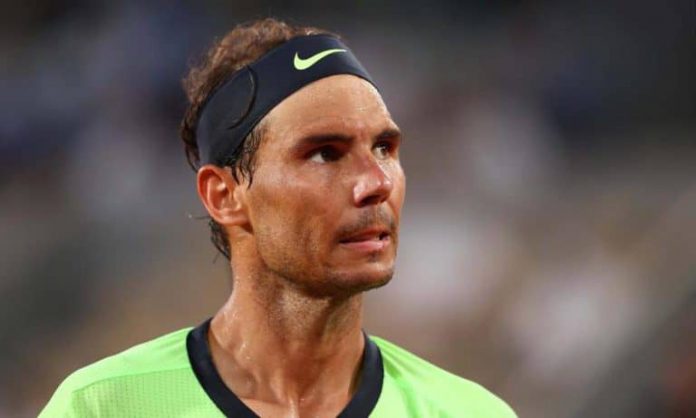 The 33-year-old was sporting what appeared to be a baby bump under her swimsuit on board the yacht where she and the 22-times Grand Slam winner are enjoying a holiday.

There has been intense speculation Rafael’s childhood sweetheart was expecting after she started wearing more loose-fitting clothes and donned a face mask at the recent Champions League final between Liverpool and Real Madrid.

There has not yet been any comment from the tennis star or his wife, who dated for 14 years before they tied the knot in October 2019 at a British-owned fortress in Majorca where Gareth Bale wed earlier in the year.

They are currently relaxing off Majorca with a group of friends on board the ‘Great White, the 78-foot POUNDS 4.2 million Sunroof Power catamaran Rafael had custom-built two years ago.

Rafael’s uncle and ex-trainer Toni Nadal said last week he was confident the 36-year-old would play at Wimbledon later this month despite his injury problems.
The two-time Wimbledon winner has been undergoing treatment for Muller-Weiss syndrome, the chronic injury he was diagnosed with in 2005 in his left foot.

He had his foot numbed to capture his 14th French Open and 22nd Grand Slam title earlier this month and has not ruled out retirement if he fails to overcome his injury problems.

Rafael told Hola! in March 2018: ‘Obviously I intend and want to form a family. I love children and I would like them to do what they want in life.’

Ekong Opens Up On Watford Exit

India committed to its unique partnership with Bhutan: Modi

Liverpool is being linked with PSG striker Kylian Mbappe