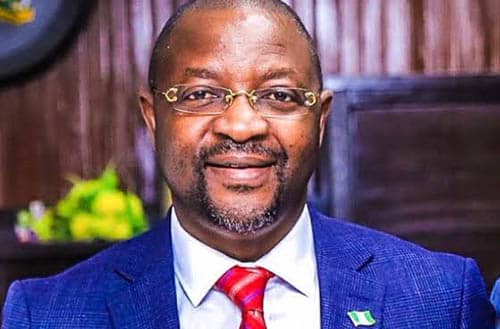 The Minister of Youth and Sports Development, Mr Sunday Dare, has urged the two gladiators in the leadership crisis rocking the Nigeria Basketball Federation (NBBF) to sheathe the sword and work for the progress of the game.

He urged them to sink their differences and come together in the interest of the sport.
The minister spoke on Monday in Abuja through Mr Kola Daniel, his Special Adviser on Media, at the first semifinal match of the ongoing Super Eight of the Basketball Men’s Premier League.

“The league is very vital to the growth of basketball in the country, some of the home-based players might be fortunate to be called upon to be part of the national teams.
He noted that the league had really boosted economic activities in the vicinity of the Moshood Abiola National Stadium, Abuja, the venue of the tournament.

“You can see traders are here in the vicinity, lots of them came into Abuja and they lodged in hotels. “These have boosted economic activities and has brought back life to the game of basketball,” he said.

The winner of the League will represent Nigeria at the 2021 Basketball Africa League (BAL), scheduled to hold later in the year.
NAN reports that the 2021 Super 8 Men’s Premier Basketball League was organised by the Federal Ministry of Youth and Sports Development due to the crisis in the NBBF.
The competition, which started on Nov. 12, is expected to end on Nov. 16.

Olympic Games: Brown rules out automatic spot for any player