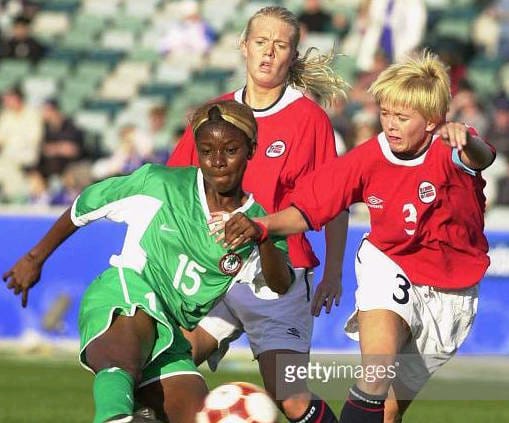 The Nigeria Football Federation has disclosed that former Super Falcons’ player and one-time assistant coach of the team, Maureen Mmadu did not play up to 101 official matches for Nigeria as is being claimed by the former player and promoted in certain quarters.

NFF’s Director of Media and Communications, Ademola Olajire, said on Monday that the Federation’s records showed that the former midfielder played 52 matches for the team between 1995 and 2007 when she called it quits with the National Team.

“Our records show that between 16th February 1991 when they played their first official game (a FIFA World Cup qualifier against Ghana’s Black Queens at the National Stadium, Lagos) and 18th September 2007 (when Mmadu featured in her last match for Nigeria against USA in Shanghai during the 2007 FIFA Women’s World Cup), the Super Falcons played a total of 103 official matches.

“Maureen Mmadu, who did excellently well for Nigeria while wearing the green-white-green, only started playing for the team during a FIFA Women’s World Cup match against Canada in Helsingborg (which ended 3-3) on 8th June 1995, when she came in for Ann Mukoro. Mmadu won about 52 caps in all, and certainly not 101 as claimed in some quarters.”

The NFF insisted that it had become necessary to put the facts out in the public space after accusations of gender discrimination against the Federation by some former Super Falcons’ players that the body had honoured players like Joseph Yobo, Vincent Enyeama and Ahmed Musa who won up to 100 caps for Nigeria but discountenanced Madu.

“Before the NFF honoured Yobo, Enyeama and Musa, we put out the official matches played by each of them. The NFF has never identified, confirmed, celebrated or promoted Maureen Mmadu as having won up to 100 caps for Nigeria. Anyone domiciling such information anywhere is hanging on to unsubstantiable claims.

“There was no doubt that Madu gave her heart out and worked assiduously hard on the field during her time representing Nigeria. But she did not win up to 101 caps. We challenge those promoting this fallacy to come up with those 101 official matches.

“For avoidance of doubt, official matches (that qualifies for a cap) are matches played wearing the green-white-green colours of Nigeria against a team wearing the colours of another country, and certified as such by FIFA. Matches against selected teams, clubs or warm-up games do not qualify in this direction.”