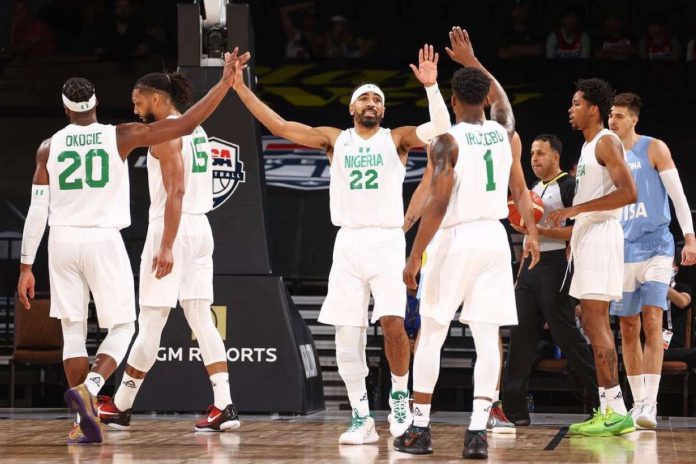 Nigeria’s Men’s national basketball team has moved up two places in the latest FIBA World Ranking released Monday and is now ranked 19 in the world with 460.1 points to her credit.

This is despite D’Tigers dropping two games out of three at the FIBA Basketball World Cup African Qualifiers in Abidjan, Cote d’Ivoire in August.

Nigeria however retains the number one spot in Africa with Tunisia taking a huge leap of 7 steps to rank 20 in the world with 447.5 points and second in Africa.

Senegal is 36 in the world and third in Africa with 329.9 points dropping four places while Angola dropped nine places in the world to rank 39 and 4 in Africa just as already qualified team for the 2023 World Cup Cote d’Ivoire dropped two places to rank 42 with 306.2 points and is 5 on the continent.

The top ranked team in the world remains United States, but their ranking points are now less than 2 above Spain.

Spain is the reigning world champions; winners of EuroBasket and reached the quarterfinals of the 2021 Olympics.

United States won Olympic gold, but clinched only third place at the AmeriCup, and did not advance past the FIBA Basketball World Cup 2019 quarterfinals.

In addition to the FIBA AmeriCup, FIBA Asia Cup and FIBA EuroBasket, the latest edition of the FIBA World Ranking, Presented by Nike also includes the results from this summer’s two Windows of the FIBA Basketball World Cup 2023 Qualifiers.