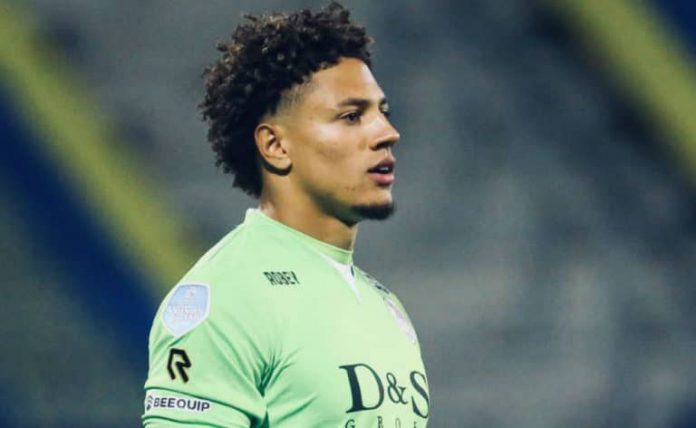 Super Eagles first assistant coach, Emmanuel Amuneke, has revealed that the coaching crew is not thinking of stripping Sparta Rotterdam ace, Maduka Okoye of his status as the national team’s number one goalkeeper.

Okoye made his international debut against Brazil in October 2019 and has since risen from third-choice goalkeeper to the first-choice.

The former Fortuna Dusseldorf goalie was in between the sticks during the FIFA World Cup and Africa Cup of Nations qualifying campaigns. The 22-year-old also kept the goal in three of Nigeria’s four games at Cameroon 2022, with Francis Uzoho manning the posts against Guinea-Bissau.

Okoye conceded only two goals, the last of which eliminated the Super Eagles from the tournament.

That strike, off the boots of Tunisia’s Youssef Msakni, is particularly painful, as it appeared Okoye could have kept out the 25-yard effort, with many fans blaming him for the ouster, especially on social media.

But Okoye has gotten over that dark times and has delivered quality performances for Sparta Rotterdam as he leads the Eredivisie side’s charge towards escaping relegation.

The youngster, joining Watford come July, remains Nigeria’s standout goalkeeper in Europe and has been included in the squad to face Ghana’s Black Stars next week.

Amuneke hints that Okoye will be in the starting eleven that square up against the Ghanaians, as they have no plans to replace him because of that error.

“I’m not a goalkeeper trainer, but we have someone in that department, which is Alloy Agu,” the former Barcelona winger told Brila.

“Regardless, Maduka Okoye is a good goalkeeper and human being, so we can’t because of one mistake dump (him).
“He’s playing for his team (Sparta), and that’s the most important thing.”

Tinubu Did Not Meet With Wike In France – Spokesperson