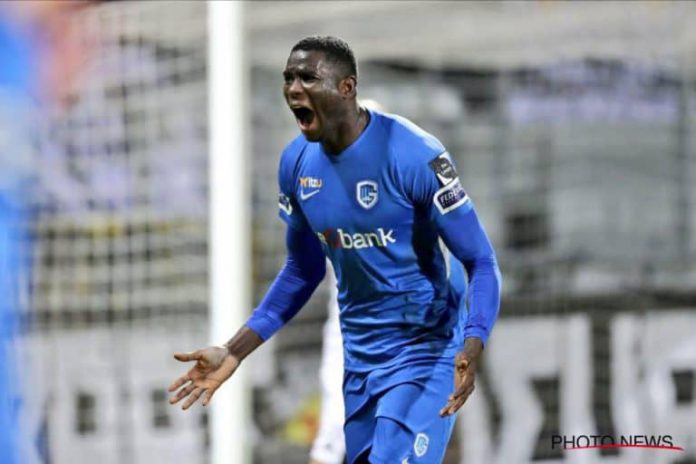 Super Eagles striker, Paul Onuachu, has expressed his happiness after scoring his first goal in almost two months. The Genk forward scored his side’s opener to help his side to a 4-2 victory over Sporting Charleroi in the Belgian Jupiler League.

The former Midtjylland man, who was the best striker in Belgium last season, had not scored in his last six appearances for Genk in all competitions dating back to the end of October.

His goal drought affected the Belgian Cup champions as they had not won a game since Onuachu’s goal against Waregem on the 31st of October.

This drop-in form saw them go on a nine-game winless streak which saw them get ousted from Europe and the Belgian Cup.
However, Onuachu’s goal was the antidote that the Smurfs needed to overturn their poor run, and he could not hide his joy after finding his scoring touch again. “It is very pleasing to score again after a few weeks.” Onuachu said after the game, as per, Voetbal.

“There was a lot of space for us to walk in, and that gave us quite a few opportunities. Now two more bangs to close the year.”
Genk currently sit ninth on the Jupiler League log, and the 27-year-old will look to keep up with his form to help his side climb higher. He will also hope that his form will help him book a spot in Nigeria’s squad for the upcoming Africa Cup of Nations.

Onana flies out of Qatar after suspension by Cameroon