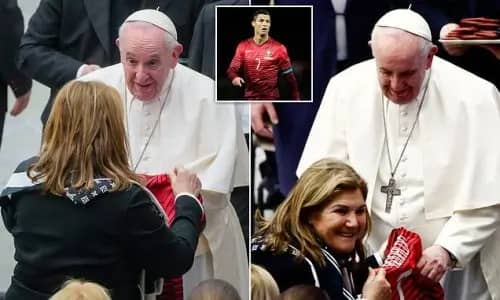 Just hours after Cristiano Ronaldo failed to score past one Pope on the hallowed turf of Burnley, the superstar’s mother succeeded in winning over another Pope in the slightly more salubrious surroundings of the Vatican.

Maria Dolores dos Santos Viveiros da Aveiro handed over a No 7 Portugal shirt bearing her son’s name to Pope Francis, who appeared delighted with the gift.

But Tuesday night, the Manchester United star cut a less than angelic figure as he came on as a substitute before storming off the pitch after Burnley goalkeeper Nick Pope helped secure a 1-1 draw against the Red Devils.

Maria, a former cook from the island of Madeira, attended the weekly general audience in the Paul VI Hall in the headquarters of the Catholic Church where she presented the pontiff with the jersey.

It appears the Ronaldo family has not held a grudge with the religious leader after he once declared rival Lionel Messi as the best footballer of all time.

Ronaldo and his family are practising Catholics, with the striker saying in 2018 while playing for Juventus in Turin that he still attends church every week.

He said: ‘I am Catholic and I go to thank God for everything he gives me. “I don’t ask for anything, thanks to God I have everything, I simply thank him for protecting my family and friends.’”

Meanwhile Francis is a life-long fan of his local Argentinian team San Lorenzo and is known to be a big football fan. His fellow countryman Diego Maradona has previously presented him with a shirt.

After they won the Copa Libertadores in 2014, the South American equivalent of the Champions League, the team travelled to the Vatican to present the trophy to the ardent fan.

Francis has also recalled playing football with a ball made of tied-up rags during his impoverished childhood in Buenos Aires.
He said he played with other children in a city square, but admitted his footballing skills were limited and he was even dubbed ‘stiff leg’.

He said: ‘ there wasn’t always someone with a leather ball, so we played with a ball made of rags, a pelota de trapo.
‘Playing in goal was a great school of life for me. The goalie has to be ready to respond to threats, which can arrive from every side.’