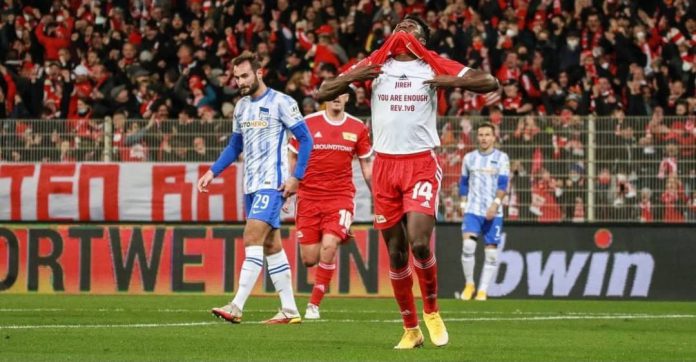 In August 2015, Liverpool announced the signing of the Nigerian forward Taiwo Awoniyi, who was immediately head out on loan with FSV Frankfurt. He joins the club having previously represented Imperial Academy in Nigeria, is to spend the rest of the season on loan with the second division German side.

Liverpool are understood to have paid around £400,000 for Awoniyi who was unable to feature for the reds owing to work permit, then come series of loan spells at NEC, Mouscron, Gent and Mainz.

In the summer of 2020, Awoniyi returned to Liverpool but failed to secure a spot in Jurgen Klopp’s side which prompted his return to a familiar country for regular first-team football but this time with Union Berlin and declared his eagerness to show his qualities at the Stadion An der Alten Försterei.

“I’m looking forward to a new home and the task at Union Berlin. Mainz was my second stop in Germany after Frankfurt and last year I was able to prove myself in the Bundesliga for the first time,”

“At Union, I want to take the next step, play as much as possible, develop and help the team to stay in the league.”

Union Berlin director of football, Oliver Ruhnert described Awoniyi’s signing as a boost for Fischer’s side.

“Taiwo is an highly talented player who already knows the Bundesliga. He has already played in several countries and will certainly be settled, in our team very quickly”.

“With his physical robustness, his team spirit and work around the box, He should make our attacking game more flexible and further stimulate the attack.”

During his first season with Berlin, 5 goals in 21 outings which helped Union to a seventh place finish, drew admirers in England after securing a UK work permit for the first time this summer but interest from Stoke and West Brom failed to develop into a firm offer and he returned to Germany in a £6.5m deal.

He seems to have found a new home in Berlin, netting 8 goals in 12 games to become the club’s record goalscorer in the Bundesliga, overtaking Max Kruse onto 13. It doesn’t sound a lot, but it’s a monumental amount for a club only in their third top-flight campaign.

13 goals in 33 league games for Union, eight have come in only 12 appearances this season, with his latest during the 2-0 derby win against Hertha putting him behind only Robert Lewandowski and Erling Haaland in the standings. His total across all competitions in 2021/22 is 13 from 20, including four in six in Europe.

Born in Ilorin, Kwara State, Nigeria, Taiwo Awoniyi reveals the positive influence Sadio Mane and Mohamed Salah had on him while at Liverpool. On Oct. 7, Awoniyi made National team, coming on as a substitute for Leicester’s Iheanacho in their 1-0 defeat against Central African Republic having represented Nigeria at all underage level including winning the U17 World cup in 2013 with the Golden Eaglets.

At age 24, the striker likenend to Late Nigeria Forward and Legend, Rashidi Yekini, has all the attributes to go on and become Bundesliga great and perhaps a return to Liverpool or top clubs in Europe to become a World beater.